Was happy to organize the seminar “Insight views from E-Estonia, the digital trendsetter” in Tallinn between 7th and 9th December 2017 with MPs and digital specialists from 5 countries, Norway, Sweden, Denmark, France and Germany on behalf of the Konrad Adenauer Stiftung including a visit of Skype and Nortal (leading in e-solutions) next to NATO Cyber Security Centre – also we discussed the social aspects/challenges of having a digital society.

Estonia has the reputation to be digital trendsetter and front-runner. In June 2017, the former president Toomas Hendrik Ilves as a representative of the state received the Reinhard-Mohn-Prize of the Bertelsmann Stiftung. The argument businesswoman Ms. Liz Mohn, head of the Bertelsmann group, pointed out during the ceremony: „As a former satellite state under Soviet rule, Estonia also used early and consistent digitalization to curb corruption, promote the development of rural infrastructure and establish an open climate of free speech and freedom of opinion.” The German chancellor Angela Merkel said during her visit in Estonia, „You can get jealous from a German view regarding the highly developed e-government system here in Estonia.“

Since 2002, Estonian citizens have been able to process nearly all official transactions online with personal electronic ID cards, which include a digital signature. In the electronic identification system, each Estonian citizen receives a unique digital access card. The government merely guarantees service and security. Already in the 1990s, the country´s strategy aimed to create a digital society with an e-government which is providing a range of services. The New York Times once wrote in 2014: „While Europe and the United States debate the role of technology in people’s daily lives, Estonia has welcomed it as a fact of life, largely shooing away concerns about data privacy that have become hot-button issues elsewhere. In the last two decades, Estonia, a Baltic region country, has transformed from being a member of the Soviet bloc to one of the most connected countries, using technology built primarily within its borders.” 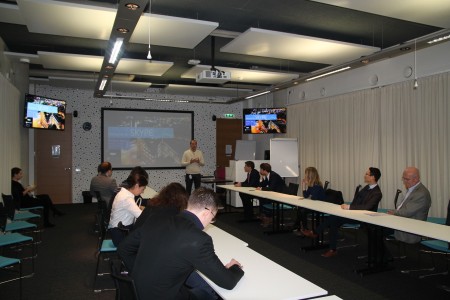 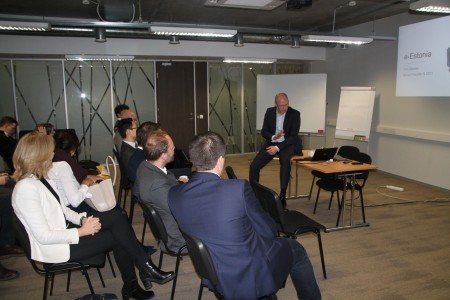